it's about standing out... 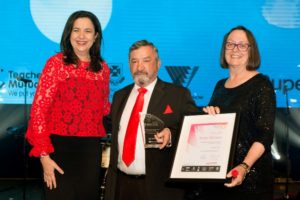 Congratulations to long-term client Cleveland District SHS for their continued success in the Education Queensland Showcase for Excellence in Schools Awards in 2017.

At the Gala Award Nights on October 27, Principal Paul Bancroft OAM was awarded Education Queensland’s top accolade of Principal of the Year 2017. 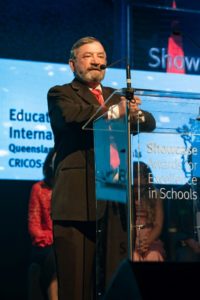 The top honour was given to Mr. Bancroft by Premier Annastacia Palaszczuk. Forty teachers from the school were on hand at the gala event to cheer their Principal on as he collected his award.

Paul has indicated his accompanying $15,000 prize win will go towards the school’s International Baccalaureate Diploma, which began last year.

Paul’s nomination and strong submission reflected his efforts over 27 years as Cleveland’s Principal to lift student achievement and build teaching capacity in the areas of language and culture, sports and the arts.

"Working with Lisa's guidance and knowledge made the grants process very easy. She is an absolute true professional and her reputation in the Redlands community as the area's best grant writer is very justified."

"Lisa always provides quality content that is informative and useful."

“I knew nothing about grants and was quite scared of applying for them, but Lisa helped me to see that it wasn’t too hard and as an organisation, we needed to be able to articulate who we are and where we want to go in the future.”

“I thought I knew a lot about grants having written them for years but at the grants workshop, Lisa taught me things that made me completely rethink my future writing.”

"Lisa has run 2 grants workshops for me with community groups in both 2018 and 2019. People find the information she provides so worthwhile and I get fantastic feedback from them!"

"I would highly recommend GrantsPlus Consulting to other P&C Associations & schools for advice, support and technical expertise in grant submissions."

"Working with Lisa makes it much easier for our club to fundraise when we don't have to include major projects within our annual fundraising budget."

"Lisa and the team are well versed in which grants are available."

"Lisa has great communication skills, knew the right questions to ask and could quickly synthesize our information into articulate responses."

"The development of our Strategic Plan met all our expectations... We are delighted with the final document as it allows us to confidently share our vision and mission."

"We have worked with Lisa and the team throughout 2017... Lisa has always been open and honest in her communications about the best approaches to help increase our chances of success."

"Lisa is very knowledgeable and in a short period of time was able to transform a large amount of information into an articulate, well-presented award application. We look forward to using her services again."

"We were so pleased to have someone so knowledgeable to assist us through the confusing tender process."

"We're absolutely delighted with the results achieved by Lisa and her team and we look forward to a continued successful working partnership."

“One of the best things that we have done for our club is to meet Lisa. She is happy to share her knowledge to help our club gain funds, which in turn helps our club to prosper for our members' benefit.”

“We rely heavily on the type of expertise and service that Lisa’s organisation offers.”

“Our partnership with Grants Plus Consulting has been outstanding, all work is completed thoroughly and precisely and results have been brilliant!”

“Lisa’s understanding of grants and grant writing is first rate.”

“Lisa is highly ethical, professional and personable. We are extremely satisfied with the projects she has completed for us.”

“We’ve forged a close business relationship with Lisa, who is always very thorough and precise with all projects we place in her care.”

“Lisa is a consummate professional and meeting her and employing GPC has been a very rewarding experience for us.”

“We enjoy working with Lisa for her no-nonsense, professional approach and have no hesitation in recommending her services."